You’re Doing It All Wrong: Parenting in the Information Age

The choice is obvious.

To circumcise or not, to vaccinate or not, to breastfeed or not, to co-sleep or not: Parenting young kids has become a series of capital-W watershed choices that are presented as ways to make or break your child—physically, emotionally, developmentally. The stakes are always portrayed as the highest of high, with nearly every single debated issue (and there are LOTS of them) leading to this one conclusion: “If you do [or don’t do] X, your child will suffer grave consequences or even death.” But, hey, no pressure, right?

Since there are always horrifically true cautionary tales on both sides of every single one of these debates, both sides have plenty of ammunition to scare the bejesus out of parents. From deciding whether to let baby sleep on his back or tummy, to deciding whether to let older children walk to the park alone, mom and dad repeatedly get the message that life itself hinges on their decisions. It’s exhausting, and brand-new parents definitely bear the brunt of it. So, to me, it feels cruel to wag an angry finger at those parents who, for example, didn’t vaccinate their kids at the height of McCarthy-ism (Jenny, that is, not Joseph). We’re all just trying to figure out what information to trust, and make sure our kids don’t get toasted.

Parenthood is a series of forks in the road, and I suspect the signage we face at these forks has become much messier and more involved than it was for generations past. It’s damn scary to keep trying to play by ever-changing road rules, as information keeps getting repackaged, reversed, or revised. It’s also scary to realize that even if we play by the numbers—or, on the opposite end, just sit at the fork and hope the winds will decide the proper tine to blow us down—there is the potential that we’re going to harm our children. Damned if you do. Damned if you don’t. Your actions can lead to horrible consequences. Your inaction can lead to horrible consequences.

The Disney measles drama is what’s on my mind as I write this blog. To me, it’s just one more reminder that, in the Information Age, a Critical Thinking class should be required coursework for parents. Heck, why not for everyone? As a society steeped in information and with crisis after crisis being presented to us in a steady flow, we need now more than ever to be better equipped to separate data from opinion, judge for ourselves what deserves our attention, recognize a spin when we see it, and draw logic-driven rather than mob-driven or fear-driven conclusions. That’s not an easy task if you aren’t taught the skills to accomplish it. I for damn sure could use a refresher course,  much more than I needed one of those cute little hospital classes on taking care of a newborn, as it turns out.

I write these words after reading this angry dad’s article. I’m not cheerleading everything he wrote (as there are many parts where I find the data points interesting but don’t draw the same conclusions as he does). I certainly haven’t walked a mile in his shoes, but I can see he’s wearing his thinking cap and trying to encourage critical thought. That deserves some praise. As he put it in his intro: “I hope when you’re done reading that you say to yourself, ‘he gave me a ton to think about.’”

My son wept today. Even though he’s six, such displays are rare with him. The tears were over a Lego creation he worked on for maybe an hour, tops, something he very generously called a Transformer. To me, it looked like it could be a Lego anything: a building, a sandwich, a tribute to Tetris.

“This right here? It’s a shooter. It grows at night, when the bad guys are out, like this—vvvvssshhoowwww, bachonk, bachonk—with wings that can’t be broken. AND it defends against rockets. Pah-kew! Pah-kew!”

He had just finished describing this terrifying beauty to me, in great and passionate detail, when he went running off, tripped, and sent the whole thing flying. When it landed on the ceramic tile in our kitchen, his creation shattered back into all its original pieces. There were maybe a hundred, all told. We had to get out the dustpan and everything.

The weeping that ensued wasn’t a goldfish-died kind of weeping, and he didn’t seem particularly interested in having an audience. It was more like a crop-is-ruined-better-get-a-second-job sort of stoic sadness you might see from a farmer at the end of a particularly bad summer. Yeah, things got kind of real for him for a few minutes there.

Instead of running to comfort him, I watched from the next room. I know he’s only six, but I wanted to see what he’d do with the ordeal. Because, you know, life is like that. Shit randomly breaks and goes wrong, and you can’t always repair it. Whether it’s shattered glass, a dropped egg, or something intangible, like a friendship, some breaks won’t mend. That’s a hard and important lesson to learn. This was a decidedly privileged and painless way to start teaching it. I’d be a fool to pass that up.

When I was in the fifth grade, I won a raffle for a beautiful porcelain figurine. Among the entire school population, there were only two winners—two such figurines—and to be one of those winners felt like winning a Pulitzer. I’m sure I didn’t think of it in those terms at the time, maybe more like meeting Olivia Newton-John or waking up with boobs. About five minutes after I retrieved the doll from the school office—she had this flowing blue gown, long black hair, and sultry eyes with eyeshadow—some kid on a BMX bike came tearing through the breezeway where I was standing, crashed into me, and sent her flying. She completely shattered, save for her sad head.

“Can we glue it?” I sobbed to my mom. She had witnessed the whole scene unfolding as she walked from her car to pick me up. “We can, right!?”

No way in hell could my mom put eight million shards of porcelain back together to look like Catherine Zeta-Jones in a ball gown. That doll couldn’t be glued. She couldn’t be replaced. It was time to let disappointments just be disappointing. My mom knew (or just learned) what I’m continuously learning: Parents can fix only so much, and that’s actually a good thing. Because real life has curves and ditches that cannot be avoided. You gotta practice for them when you can.

I could see that today was that kind of training day for my son. When he was ready, I took him up in my arms and hugged and kissed him and told him how much it sucks when something you work so hard on gets ruined. But I didn’t make it “all better” for him. I didn’t even try. That’s his job, and he figured out how to do it all by himself. 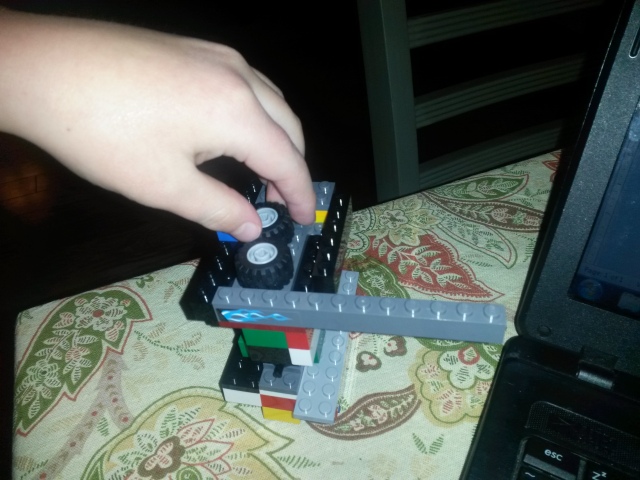 Three years ago today, on my mom’s birthday, I received a call that punched me in the gut during a business lunch: It was my dad, letting me know that a possible donor heart had been found for him.

In the business of heart transplantation, the person in need of the heart lives in a kind of limbo as a name on a registry of potential recipients. My dad was fairly high on the registry because of the severity of his condition, but many months had passed since he was placed there. And until that phone call, every time his name showed up on my caller ID, my stomach would do a flip.

My lunch partner, a client, had the uncomfortable job of watching me cry into my sushi after I hung up. As I apologized for my blubbering, I remember him saying, “It’s okay. This is real life!” He was exuberant, and I knew what he meant: It’s so easy to forget that life isn’t a collection of errands and pastimes and lunch dates and things that merely add up to a day and another day and another one after that.

En route to the hospital, I picked up my kids from school. They were giddy as just-fed hamsters, not being old enough to fully grasp the complexity of what was happening. I’d say the glee was slightly more than they show at the county fair when I let them eat cotton candy, and slightly less than they show on Christmas morning. Gently I explained that our excitement came at a very high cost: Their grandpa was about to gain a heart because someone had died, and the surgery he was about to have was incredibly serious. It was important to me that they regard the gift much differently than ones left under Christmas trees. This was no Lego set or American Girl doll. This was real life.

Once at the hospital, I realized the kids would need some diversions. There would be hours of waiting for screening results. The surgery itself could take well over a dozen hours. So, I left to buy some coloring books at a drug store up the road. On my way back in, waiting by a set of interior elevators that would take me up to my dad’s room, I overheard a somewhat hysterical conversation taking place between two women. They were huddled together on a bench, shoulder to shoulder, heads bowed. One was telling the other what a beautiful thing she’d done, what an amazing choice she’d made. She said to take comfort in it, because it meant someone else out there would get a chance to live. The sobbing was unbearable. My chest dropped into my ankles. Was this the donor’s loved one?

Because his donor’s survivors opted not to respond to the letter my dad was allowed to write several months after surgery, we still don’t know who my dad’s donor was. We might not ever know. But I have my suspicions.

The day my dad had his transplant, there was an accidental death here in town, a young woman hit by a car. I read about it in the news the next day, noting how close the time of death was to the time my dad got his call. Was it her? My dad’s donor was classified as “high risk,” which can mean any number of things, one of the typical ones being a history of IV drug use. The obituary of the woman whose death was reported in the news included a request that donations be made to a foundation for diabetes research. Surely she’d been a diabetic. Did she receive insulin by IV?

I don’t actually know if this woman was my dad’s donor, but I feel sure that those women in the hospital atrium were her loved ones. So, I feel sure she was somebody’s donor. That’s why I keep a photo of her on my desktop. For the past three years, her face has greeted mine at some point nearly every day, every time I fire up the machine where I write these words. Every time I look at her face, cupped in her own hands with a playful light in her eyes, I say a little prayer for her and the people she left behind. I wonder if she did what she wanted to do before she died. I feel grateful. And sometimes I linger a little longer on the picture, remembering that this is real life. We each get just one to call our own. Mine is nobody else’s, and I get to choose what becomes of it, at least until I die and leave a little piece of it to someone else.

Posted in transplant | 1 Comment
The Momplex
Blog at WordPress.com.