I was born in a hospital owned by a copper mine in a so-called “company town.” My first vision in life was undoubtedly a pair of cowboy boots, worn by the obstetrician who delivered me. He’d come fresh from a golf game and not the annual rodeo or horse races. I’m told he was miffed that his 18 holes were interrupted by the work of catching me. But, if you think about it, I paid for his country club dues.

The country club was owned by the mine, too. So was our family’s house, before my parents bought it on the cheap. Maybe twenty thousand was big money then, but the house—on executives’ row—was modest and small: cream-colored clapboard with white trim, plopped in the middle of a postage-stamp yard. I used to hide under the porch stairs, only slightly less fearful of the cobwebs than I was of being found during hide-and-seek.  I accidentally hanged myself once in the backyard, and I can still see my little friend Darran fleeing as I dangled from the swing set. My mom happened to look up from the kitchen window just then, and came out just in time to slacken the jump rope.

Inspiration Hospital was just up the road, a regular weekly stop for us, but rarely for things as serious as a hanging. We went because my big sister required weekly allergy shots. When the nurse would tell her she’d been a good boy, which was most days, my sister’s eyes stung with tears. She’d shuffle angrily down the linoleum hallway wearing her sheriff star, faded t-shirts, and jeans. Her straw-straight hair was knotted as a spool of thread from the bottom of a sewing bag. Because people often mistook us for twins, and nobody ever called me boy, I wondered what was so special about her.

My sister had chronic ear infections and was, by all accounts, a grumpy child. One day, like many other days, we left from the hospital with a prescription in my mom’s hand. My sister sat slumped against the passenger-seat window with a fever. I happily jabbered in the backseat, anxious to get to the store where the drugs were dispensed. Along with filling prescriptions, Sprouse Reitz also had aisles and aisles of fabric, a shelf full of Barbie clothes, and a row of gumball and candy machines.

“Can I go in?” I asked. My mom was smoked from caring for a sick child, and I was always asking inconvenient questions like that—always talking, in fact. “Please?”

“You can come in.” Her lips were pinched tight. Even at seven years old, I knew she didn’t want to cart me along. Maybe she worried my sister would hit me if I stayed behind in the car. That sort of thing happened sometimes. “Just make sure you stay with me,” she added. “Don’t wander.”

Once inside, I roamed to the candy machines at the front of the store while my mom spoke to the pharmacist in the back. If I looked at the machines longingly enough, hungrily enough, I was sure my mom would cough up a dime. But after what seemed like a few minutes, my reverie was broken by the sun flashing off her car as she drove away. I was pretty sure she meant to do it. I felt this in my gut the same way a seven-year-old just knows her stuffed animals talk at night.

I don’t remember if I whimpered or wailed, but soon a woman with very thin hair and a diameter twice her height came over to help me. Her name was Mrs. Davenport. That much everyone knew. She was almost as short as me but had a chest that went on for days, like two sleeping bags rolled under her blouse. “It’s okay, honey,” she said. “Did you lose your mommy?”

I didn’t want a new mommy, and my gut told me that’s exactly why she was asking. She hugged me so tightly, forcing my head into the dip between her huge breasts. “It’s okay,” she said. “Do you know your phone number?”

Of course I knew my number, but in my panic—and hers—the call was placed well before my mom had a chance to make the 20-minute drive home. In those days, before voice mail and pagers and texting, if someone didn’t answer, it was tough luck. Sweet Mrs. Davenport hung up and stroked my hair with the thick fingers of her small hand. I didn’t want her touching me, but I had no right to say so. I was only seven, and she was going to be my new mom now.

It stuns me as a parent now, how immediately sure I was that my mom meant to leave me there. Wasn’t everything a parent did intentional and deliberate? Each decision perfectly considered? Each choice a reflection of my value? I’d been told not to wander. Being abandoned was the consequence. It never occurred to me it was an accidental one. I think about that sometimes, the omnipotent and prescient power my kids think I have.

Eventually my mom returned to the store—maybe 45 minutes had passed—and scooped me up in her arms. Her voice was calm, reassuring, and wracked with sugar-coated guilt. My sister had known the whole ride home that I wasn’t in the car, but she wanted her bed and some medicine. “Why are you so quiet back there?” my mom had asked, before realizing I wasn’t “back there.”  When she reached me again at the store, still being smothered by my new mom, she looked much like she looked a few minutes after the hanging. It was a false calm, talking a little too fast and smiling a little too hard.

“I want to see my neck,” I’d asked on my hanging day a few years earlier. “It feels funny.” I remember Sesame Street was on the tube, and I was curled up under a blanket on our itchy goldenrod couch. My throat felt funny, like an unshelled walnut was lodged in the center. So much for that game of cops and robbers.

She thought for a minute, then walked to the back bedroom and emerged with a hand mirror. I looked at the parallel lines of rope burns around my neck, cherry red and gradually diminishing to a point, like a tornado—and I burst into tears. “It hurts!” I cried. “It hurts so much!”

I don’t know why I believed her. From the start, there’s been evidence things aren’t that simple: cowboy boots in the delivery room, nurses that call little girls boy, cobwebs in my hiding places. I believed her then, as I’d believe her for years, even though my friend had left me hanging from a noose, behind the fluttering white sheets that danced a beautiful dance on our clothesline. 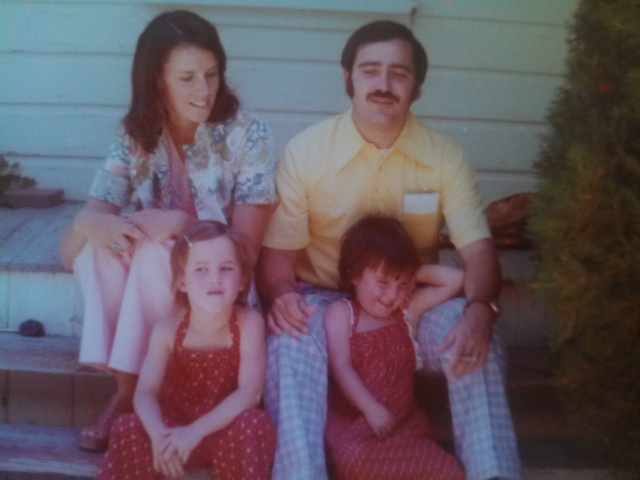 This entry was posted in Past life, speed-posts. Bookmark the permalink.