Swallow Back the Years

I do not want my kids to grow up. There. I said it. I like them little. I like how they smell. I like how my daughter’s voice still sounds about half her age when we talk on the phone. I like how my son says he’s built a Lego structure by following the “durkstructions.” The backs of their heads and their little buns are cuter than any interspecies bonding pic you can throw my way.

A few nights ago, during bedtime snuggling, my 4-year-old son asked me, “Mom, does it make you happy if I’m not growing up anymore?” I didn’t answer right away. I don’t really want my kids to know that I want them to stay little. I don’t think that’s healthy. My cousin suffers from severe anorexia, and last year I read in some old 1970s book on the subject, written by an eating-disorders specialist, that some anorexics seem to have a deep-rooted fear not so much of getting fat but of getting big, as in not a kid anymore.

I don’t need a medical professional to tell me that it’s not wise to try to keep your kids from growing up, though. Kathy Bates makes the most compelling case of all:

But still. When my son asked me the question, he smelled like Mr. Bubble and was wearing his solar-system pajamas and had his tiny fat palms splayed on either side of my face. His eyes were searching mine for the truth.

“Good! I’m not growing up anymore.”

“How are you going to do that?” I asked, realizing that I should have lied or at least told the other truth. Which is that I do want him to grow up to be a man but to also leave some sort of specter of his 4-year-old self behind, preferrably one that will still come cowlicked and bright-eyed and crunching down the stairs in the morning in his GoodNites protective “underwear” (a.k.a. an XL pull-up, as if we can’t read between the lines, Huggies).

“I don’t do it anymore!” he said. “I stopped growing up! I don’t ever grow up anymore!”

Man, he was really excited about this. Kind of heartbreaking, especially when I think about the comments his 9-year-old sister has made over the past year, about not wanting to turn 10 next year. She’s adamant that all the fun in life is when you’re a little kid, and that the bigger you get, the more schoolwork and life-work you have. Becoming a teenager? Fuggedabowdit. She dreads that. I set a kiss on the bridge of my son’s nose and smiled.

“Wait a minute. Are you feeling sick?” I sat up and scrutinized his face. “Do you feel like you need to throw up?”

“Nope.” He shook his head. “Because I swallow it down!”

“Your throw-up? You mean you swallow down your throw-up?” He nodded proudly, giving me his happy-drunk devilish smile with upturned-V eyebrows, a dead-ringer for Jack Nicholson: 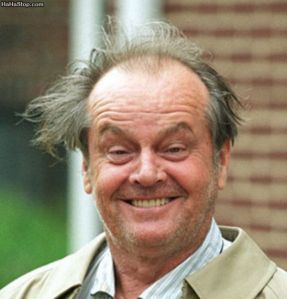 A face only a mother could love. And I do, but only on my 4-year-old.

“When do you do this?” I was feeling sick myself now. “Did this happen today? Have you been feeling sick?”

“Whenever I feel it come up.” God, he was so proud of himself.

Ummmm, yeah, kid. You can go ahead and grow up now.

(From the archives, originally published 2012)

4 Responses to Swallow Back the Years