It’s, what, maybe our fifth night at my grandpa’s apartment? I’m losing count now. We’ve been holding bedside vigil with him, all the women in the family, which is not a lot of women and yet nearly all of the family. My mom and her sister. My sister and me. Tonight there’s also my daughter. She’s only 10, but she asked to come. I wasn’t expecting this.

He doesn’t look like himself, I tell her. His mouth is open really wide—like this—and he’s gotten even thinner since you saw him on Thursday. She says she knows. She says okay. He’s gasping, and it sounds like he’s choking, I say. She just wants to give him a card she’s made. He won’t be able to see it, I say. You can tell I’m really scared. She has no idea what dying looks like. I’m just learning myself.

Of course, my dad has been coming and going. It’s “just” his father-in-law, but being that my dad’s own parents were killed in a car crash some 17 years ago, there’s a surrogate thing my grandpa wanted to do. Call me dad, Grandpa asked one day. And my dad obliged the man. This old man. This deaf old man. This man with finger joints thick as walnuts. This no-longer-towering man whose shoes I used to stand on to dance. Walk like a man, fast as I can, sang Frankie Valli. I can still see the hem of my grandpa’s pants swishing over his big Frankenstein shoes. I was so small. He was a giant.

As the giant shrinks, so does his world. Sure, he was always happy to see us, always greeted me with joy when his hunched-over body slowly climbed into my car. He always seemed tickled when he noticed, ten minutes into the drive, that the kids were in the backseat. “Oh, ho, ho!” he’d laugh. “Hello, little snipes!” But mostly he was staying home. Because it was hard to get to the bathroom. Because there were too many steps up to the restaurant. Because scooters don’t go over grass. Because it was too loud to hear. Because it was embarrassing. Because he was kind of tired.

“I’ve been sleeping all the time,” he told me just two weeks ago, when he happily agreed to go for coffee. It was the last time I saw him before he began this slow death. “Every chair I see looks comfortable, and then I sit in it, and it is.”

He’s gasping loudly in the bedroom, like he’s been doing for days. For the umpteenth time, I’m both surprised and secretly relieved he’s still alive when I walk into the apartment. My mom and aunt are playing cards in the front room, and the smell hits me in the face. It’s powerful, thick, and musky, a smell you stop noticing after just a few minutes, as I’m learning. I know it’s a smell that happens when old people want to live independently but barely can. But now I think it’s the smell of dying. I hate thinking that.

“Are you okay?” I ask my daughter. She nods, and we walk back to the bedroom. Great Grandpa doesn’t look like Great Grandpa anymore. I think it’s worse than she thought. But she’s okay. She wants to look, but she doesn’t want to look. She looks and looks away. I don’t know which one of us gives him her card. On the front she’s scrawled, “Get well soon!” But on the inside she’s written, “You’ve had a long life. I hope you enjoyed it!”

During the day, I’ll tell you we haven’t been sitting around crying and wiping our noses constantly. You can’t do that 24/7. Yes, we cry. But we also play card games and board games. We laugh and tell stories. Today my sister takes my daughter for a ride around the complex in his scooter. We time each other to see who can get from living room to fridge and back in the scooter in the shortest time. We eat junk food. But my favorite part is the singing. It’s my favorite because I think the rest might confuse my daughter, or maybe me. Of course, I want her to know it’s okay to be okay. I don’t want her to be devastated—and she isn’t—but I don’t want her to get too silly either. I’m not sure it’s the coping mechanism I want to model. That’s why I love the singing.

We gather around my grandpa’s bed, and we sing songs he loves, including “Me and Bobby McGee,” which sounds a lot different when you sing it to an old man who loved it, an old man who’s actively dying. My mom and aunt can sing in harmony. My daughter has a pretty little voice, and it’s coming at me from over my shoulder. I want to cry. We try to sing my grandpa’s favorite hymn, “Just a Closer Walk with Thee,” but we don’t know all the words. My sister looks them up on her iPod so we can sing along, and we do, but the last verse is missing. So, we try a different version, and when we sing the last verse, I see my grandpa’s face clench up a little:

When my feeble life is o’er,
Time for me will be no more,
Guide me gently, safely o’er
To Thy kingdom’s shore, to Thy shore.

The hospice nurses keep telling us it won’t be much longer, maybe today, maybe tonight. He hasn’t had any fluids or food for nearly a week. This is imminent, they say. But it never is. “It’s inhumane,” I told my mom when she asked me yesterday what I was thinking. “This is inhumane.” But now I know that every day has been for something. Every painfully long day that his tired old body has clung to life, has allowed us to do one more sacred thing before he goes. And another. And another. Today it was hearing my daughter sing to her dying great grandfather, to experience the beauty of all these strong women—I’ll count my little girl among them—carrying along a strong, sweet man through the tough work of dying.

After a week, my grandpa finally passed one evening with my mom and aunt at his side. He died with my daughter’s card in his hand, and after we washed his body and prepared it to go, my aunt returned the card to the same place. That’s an image I’ll never forget. 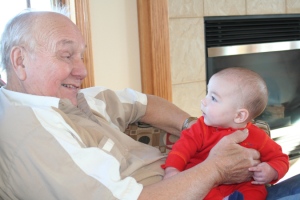 I sense a song coming on.

This entry was posted in daughters, death, grandparents, Grief. Bookmark the permalink.

9 Responses to A Good Death