In Which There Is Waterboarding at the Momplex

Many moons ago, circa 4 B.C. (Before Children), my husband was in South Korea for annual training with the National Guard. He returned with this handsome pair of newlywed ducks as a gift to me: 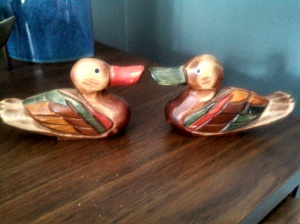 Korean Wedding Ducks are meant to be placed in a married couple’s home and positioned to indicate the current climate in said couple’s relationship. If the birds are touching noses, everything’s copacetic. If they’re touching bums, there’s probably been a tiff. The ducks are super-handy if you’re passive-aggressive and need to send a subtle message to your spouse. Not that I would ever do that: 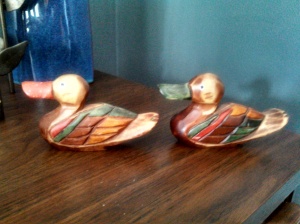 Okay, fine. That’s my duck on the left.

To be honest, I altered these ducks right after I got them. True Korean Wedding Ducks come with a ribbon tied around one OR both of their beaks. (Note that I didn’t know that there was an option between “one or both” until I Googled Korean Wedding Ducks and saw that most have both ducks ribbon-gagged.) 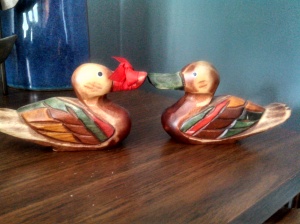 This is how they originally were presented to me. I am not the only passive-aggressive person in this marriage.

I’ve had a lot of fun with these ducks over the past decade-plus. Sometimes I’ll turn my duck’s butt right into my husband’s duck’s face right in front of him, then walk out of the room. Example? When he ordered a pizza last year on Mother’s Day and ate all of it with the kids while I was out delivering a gift to my own mom. He also left me the dishes. Full disclosure: This is NOT normal behavior for him. He’s usually quite thoughtful.

Still, we’ve had these ducks for so long, I often forget to use them. In fact, over time, they’ve migrated from the mantle in our living room to a ledge in our bedroom. This means that if you find a duck with it’s ass in your duck’s face, you’re usually unsure about how long it’s been that way. It’s kind of an unsteadying feeling. You start replaying the past several days–or weeks–to remember what you might have done wrong. Well, today, I wanted to make absolutely sure that the repositioning gets seen. I’m pretty sure it will:

What do you think? Is the message pretty clear?

15 Responses to In Which There Is Waterboarding at the Momplex