It’s an age-old story, known the world over and spanning the centuries. No, it’s not the one with the stable and the wise men and the donkey trying to eat Baby God’s bed. It’s the one where you’re trying to enjoy a family meal but instead have to race through swallowing your pork roast to remind one of the guests, “We do NOT put our penises on the table.” Right? Am I right?

My son is four, and like his peers, is still a fairly long way from being civilized. We really did have to tell him to get his penis off the table last night. Yes, he puts on his own socks, says please, and washes his hands after toileting, but he also rips off farts, naked, while getting piggy-back rides. It’s gross, but the kid’s got chutzpah.

The one place where he shows the most promise of shedding his caveman tendencies is actually the room right next to where he eats nude. Yes, in the kitchen, he’s like a little domestic god-in-the-making. He loves to help me cook (and sometimes even clean). We’ve made pies and breads and roasts and sauces together, and he always seems like he’s paying such close and studied attention. But he’s still four. Keep that in mind as today, in honor of the holidays, I share his first-ever recipe of his own design. Get out your recipe cards and keep this one handy for your Christmas table. It’s a keeper. 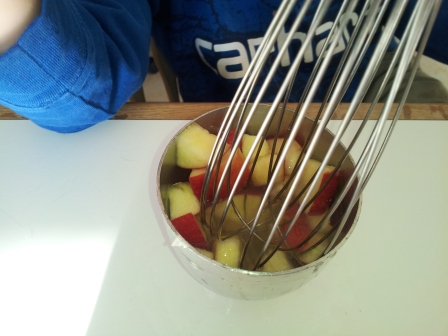 Shut up, Barefoot Contessa. He’s got this one.

This entry was posted in humor, sons. Bookmark the permalink.