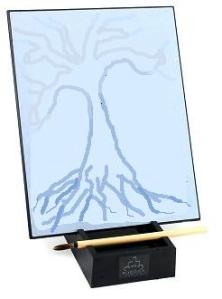 I am sitting in one of my favorite coffee/wine shops. Two women, upwards of 50, are arguing about real estate at at a table nearby. “Don’t tell me that!” one practically shouts at the other, a real estate agent with a smart teal coat and a ruby-red shirt, a boy peacock of sorts. The peacock is fanning out her feathers as she tries to interject comments about dual-agency representation.

“I already know that!” shouts the frumpier one.

The indignant one reminds me of Tracy Morgan when he used to do his Star Jones bit on Saturday Night Live.

As I sit here typing in my too-big jeans, hair not yet combed, mascara most assuredly smeared under my eyes, I feel a million miles away from these women. They have Day Jobs, careers that they allow to ooze into the rest of their lives until their lives seem inconsequential without their jobs. They have appointment books and toggle-buttons on their Talbot’s coats. Whatever today’s prime rate is, they know it. I am not like them anymore.

I have been out of the work force for more than five years now. My last job, running the publications arm of a vibrant agency in DC that aspires to building small-d democracy around the world, is foggy to me now. I can’t really remember what it’s like to have a day job, to have an alarm clock wake me at a designated time on weekdays, to sleep in on weekends. There are expensive clothes hanging in my closet, business cuts, that do not fit me anymore but hang as some sort of reminder of where I’ve been. I’ve no intention of putting them on again.

I have worked in cubicles. I have had an office with a door. I have boarded planes for assignments. I have ridden, coffee and briefcase in hand and feelings of dread in my gut, on too many elevators going up. But the last time I stepped foot on one of those rides, sporting my work hair (twisted on top, red pens stuck into it), it was going blessedly down. “I am never going to work in an office again,” I said out loud to my then seven-months-pregnant belly. Exhilirating.

Five years later, I am readying to become an earner again, if only marginally so, and I feel like a stranger in a strange land. The women near me today in the coffee shop remind me how a job can cause you to care so much, or think you care so much, about things that really do not matter in the grand scheme. If I had a nickel for every time I lost sleep over choosing a font face for a publication…

I’m really not ever going to work in an office again. And my journey back will be slow. I already do a little freelance writing now and again. I’ll find more. I’ll build up a client base. I’ll start knocking away at that book I’ve always intended to write. But I will never again look at a job as some sort of alternative to being a stay-at-home mom. It’s apples and oranges.

Sure, like all parents, I’ve had to make a choice between going to work and staying home. I’m just beginning to see that there’s a problem with the way we all talk about that: We talk about it as though having a job and staying home to parent are comparable somehow. As though, in some way other than that they usually take place during the same time of day, they are options in a shared category. As though we are choosing between caffeinated or decaffeinated, between living on the coast or living on the plains, between Catholicism or Islam. But it isn’t like that all, and thinking of career versus motherhood as though these are some sort of this-versus-that takes the value out of each, particularly out of the latter. Take a potato and set it next to a robe. Put a Latin textbook alongside a turtle. Just because you ask me to choose one over the other doesn’t mean the two have anything to do with each other in any other way.

Yes, I’m deconstructing to cope, because the thought of returning to work almost pains me somehow. Don’t get me wrong: I love to write. I want to contribute. It feels good to earn. But it’s the way the world around me has come to talk about motherhood versus job, the idea that’s been chiseled so deeply into my brain. This idea that a job can somehow fill that metaphysical place that parenting babies and young ones has created, that all-consuming place where the self is given over so deeply, where — where what? I don’t know. It’s otherwordly, and not really a place or a time at all. It’s like another dimension. And the idea that a job is going to fill in spaces created and left behind by this deeply complex experience in my life? That’s some kind of sacrilege.

I just have to untangle this idea that work is anything other than what’s next. It’s not in place of. As I untangle, I see a little part of what hurts: When it’s time to work, it means my children will be in less need of my constant supervision and hands-on care. It means they will be farther down that inevitable path of separating from me and becoming their own people. Good for them. And yet it means that I will have little to no use for all the things I’ve learned in these past five years, from diapering to breastfeeding to navigating and respecting the emotional complexity of preschoolers to the science of napping biorhythms. These are not easy things, not to me, not a one of them. Like a painting on a Buddha Board, these things will fade into past as the present takes its proper place at front and center. It hurts me to know it will all dry and disappear.

As for going back to to work, sitting down in coffee shops and arguing about font faces or deadlines? It will be about coming to terms with the notion that I have to return again to the world from which I’ve cut myself off for so long. It’s a world where news headlines figure prominently, where with spidering fingers, my life will stretch out from itself and the protective nest I’ve molded for and inhabited with my young children, to include things other than. It will include, once again, a space for the adult me and my now small-seeming ambitions that once propelled me to wake up each morning and answer to an alarm clock.

So, as I sit here in this coffee house, readying to look at freelance gigs, I will try to remember that things that matter so much less than whether my son is circumcised and whether my daughter feels valued, can still matter. They must still matter.

This entry was posted in career, motherhood. Bookmark the permalink.